Treaty on Strategic Offensive Reductions (SORT) was signed by Russian and US presidents at Moscow Summit on May 24, 2002. The signing was preceded by six months of intensive bilateral negotiations between Russian and US experts. 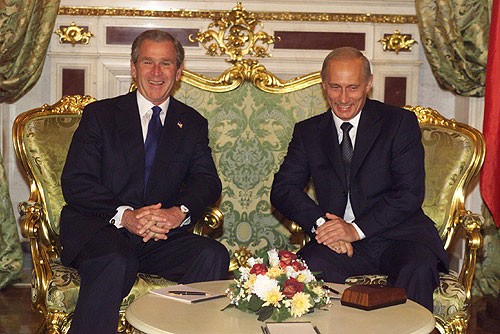 Although de jure the signed document is a Treaty subject to ratification by Russian Federal Assembly and US Senate, de facto it is just a codification of unilateral statements made by the presidents at November, 2001 US-Russian Summit in the US. The main drawback of this document is that its provisions can be interpreted differently -- because key terms and conditions are not defined in it. Also, the document does not specifically define procedures of liquidation of weapons reduced and verification of the process.

Particularly, although the sides agreed to "reduce the levels of their strategic nuclear warheads to 1,700-2,200", they apparently have not reached a compromise in the definition of "strategic nuclear warheads" and, consequently, in warhead counting rules. It should be underscored, that START I Treaty uses different definition - "warheads attributed to strategic delivery systems" ("strategic warheads"). Appearance of an additional word "nuclear" in the new definition means that the Russian side in fact has agreed with the U.S. interpretation, which allows to deploy conventional warheads on strategic delivery platforms and at the same time excludes that platforms from counting. US Nuclear Posture Review released in January, 2002, assumes that further reductions will be conducted by means of downloading strategic platforms and shifting them to non-nuclear role. At the very beginning of SORT negotiations Russia insisted on irreversible reductions, which assumed "traditional" approach towards counting of strategic warheads (i.e. according to deployed launchers), and verifiable elimination of launchers reduced. The U.S. side made it clear that it wants to preserve the possibility to re-deploy reduced warheads should the need arise, and therefore refused to eliminate launchers.

Although the signed document assumes that the the sides will have to work out the essence of the new document within the framework of Bilateral Implementation Commission, however, this process may last until the end of the term of the new treaty, namely December 31, 2012, since there are no additional limitations or specific phases of the new treaty implementation and each of the sides will itself determine the composition and structure of its strategic offensive arms. Which means that in fact both sides will implement reductions of their strategic forces by decreasing the status of readiness. That is, what was referred to as "diminishing the status of alert" before, now is suggested to be called "reductions". Furthermore, if no breakthrough is achieved over the problem of transparency of the reductions, the sides will have nothing left but "believe each other's word". However, US still possess rather effective means to control Russian nuclear arsenal -- Cooperative Threat Reduction Program. Elimination of Russian strategic weapons is currently implemented under this program, funded by the US Congress.

In the end of June, 2002 text of the Treaty and article-by-article commentaries thereto were sent to the related committees of the State Duma and Federation Council of the Federal Assembly of the Russian Federation. Closed hearings of the treaty in the State Duma began October 1. According to existing information, open hearings are not scheduled.

The US Senate unanimously approved the US-Russian Strategic Offensive Reductions Treaty on March 6, 2003. The Senate defeated two amendments to the treaty ratification resolution. One would have required Senate approval before the United States could withdraw from the treaty. The second amendment would have required annual intelligence reports on treaty compliance.

This page will be updated, as the events evolve.

Please address your questions and comments: to the Editor | to STAR Forum

This page is maintained by Eugene Miasnikov.
© Center for Arms Control, Energy and Environmental Studies, MIPT, 2002-2003.